Stand Together, Stick Together – “Has mental illness gone viral?”

FRIDAY: Part Five of our Stand Together, Stick Together #MHAW16 campaign: “Has mental illness gone viral?” Written by Mentality… 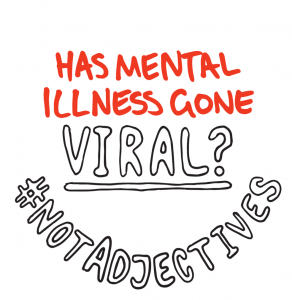 There are two ways to view this question:

Can you catch a mental illness? Has social media created a platform where it is much easier to talk about mental health and is this a good thing?

Often during workshops, Mentality are asked if you can catch depression and if their parents have a mental illness, will they catch that? You certainly cannot catch a mental illness like a cold, you cannot sneeze depression over someone. If a friend is struggling with their mental health, it does not necessary mean you will start struggling with yours. However, it is important in this situation to look after yourself and speak to an adult if the situation is getting too much.

Also, there is little research to confirm that mental illness can be passed through genes. If your parent has a mental illness you are unlikely to develop this illness too, however, you may learn unhealthy coping methods which could lead to poor mental health.

The second thought raised is the use of social media. There are many ‘cute’ post about mental illness and the way to look after yourself. You can find a huge bank of personal stories, as well as darker corners of the net where people encourage unhealthy ways to cope with mental health struggles. Some people say that social media is a useful tool to seek support and make it easier to speak out. Other people are saying that the use of social media to talk about mental health is encouraging a self-diagnosing culture, where we a label every day emotions as illness.

Social media is being used as a form of social control, labeling as though there is something wrong with people when we should actually be challenging the social injustice that is causing poor mental health.

What is your view on how social media is used to talk about mental illness?