A note on OTR's availability during lockdown

Becky from Mentality Project, OTR’s youth-led campaigning group, had an absolute blast at our World Mental Health Day 2014 event at The Galleries, Bristol. So much so, that she wrote this brilliant blog for us. You can also see more photos from the event on Mentality’s Facebook page. Thanks to everyone who came along and a massive well done to Mentality for organising such a fab, fun and useful day. Take it away Becky…!

I’ve been volunteering with The Mentality Project (part of Off the Record) for a while now – around 3 or 4 months I think. We’re a group of young people who meet once a week, with an aim to campaign to break down the stigma surrounding mental health, and to raise awareness. I absolutely love the group, and I love what we’re doing!

Last Saturday, we held an event to mark World Mental Health Day. We decided that we wanted to do something quite big, to really get the attention of the public- so we chose to run activities on the bottom floor of the Galleries (one of Bristol’s central shopping centres). Each of the activities was related to positive mental health- for example, we had a ‘washing line’ on which we asked people to hang paper clothes with something positive about their friends written on, to represent the importance of the people around you. People collected a stamp from each activity to ‘earn’ themselves a Happiness Box. The Happiness Boxes originally came from the summer NCS programme, and contained various ‘happy things’- for example, products from Lush, stress balls and sweets. 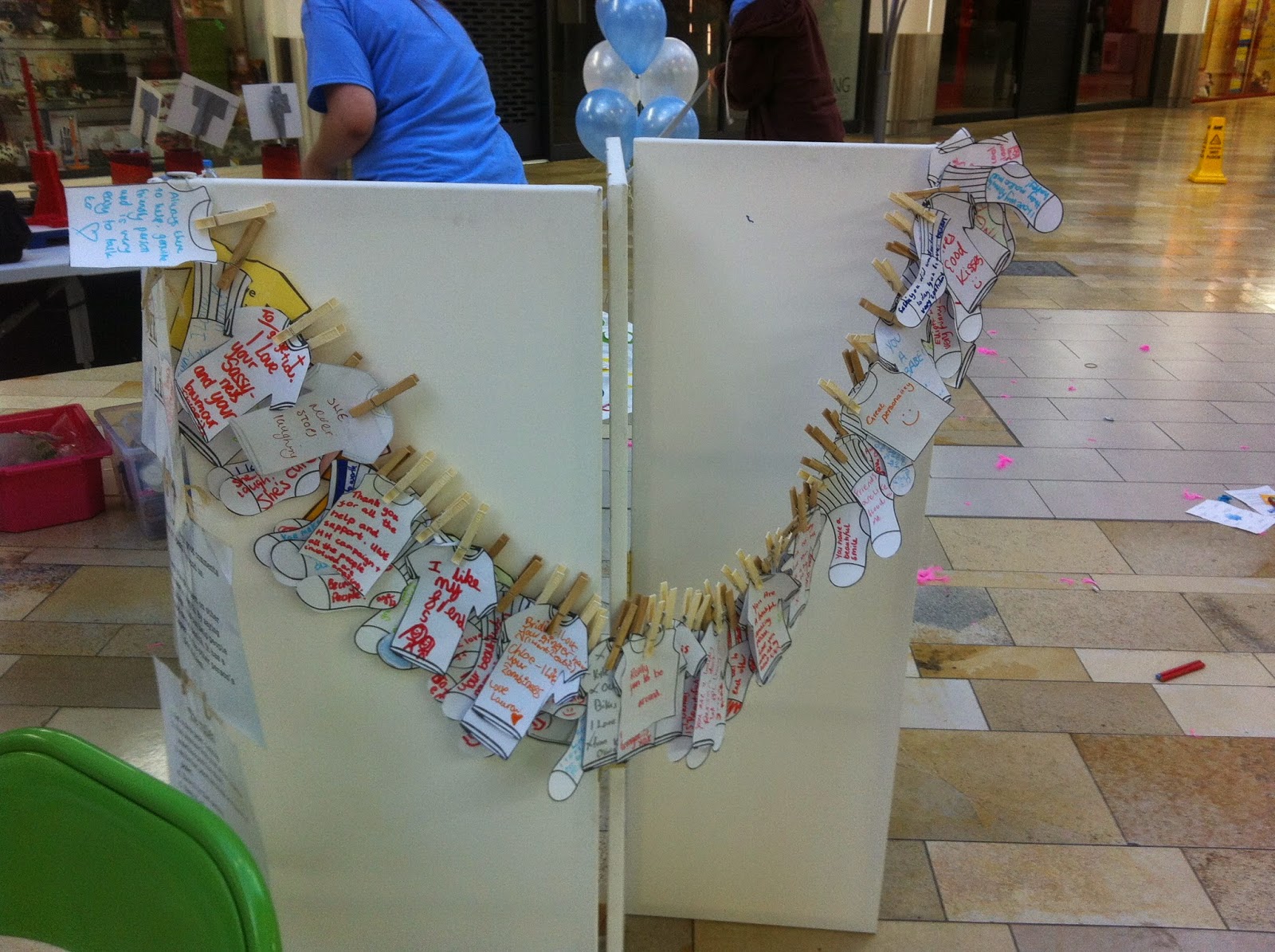 Happiness Boxes (some of!) 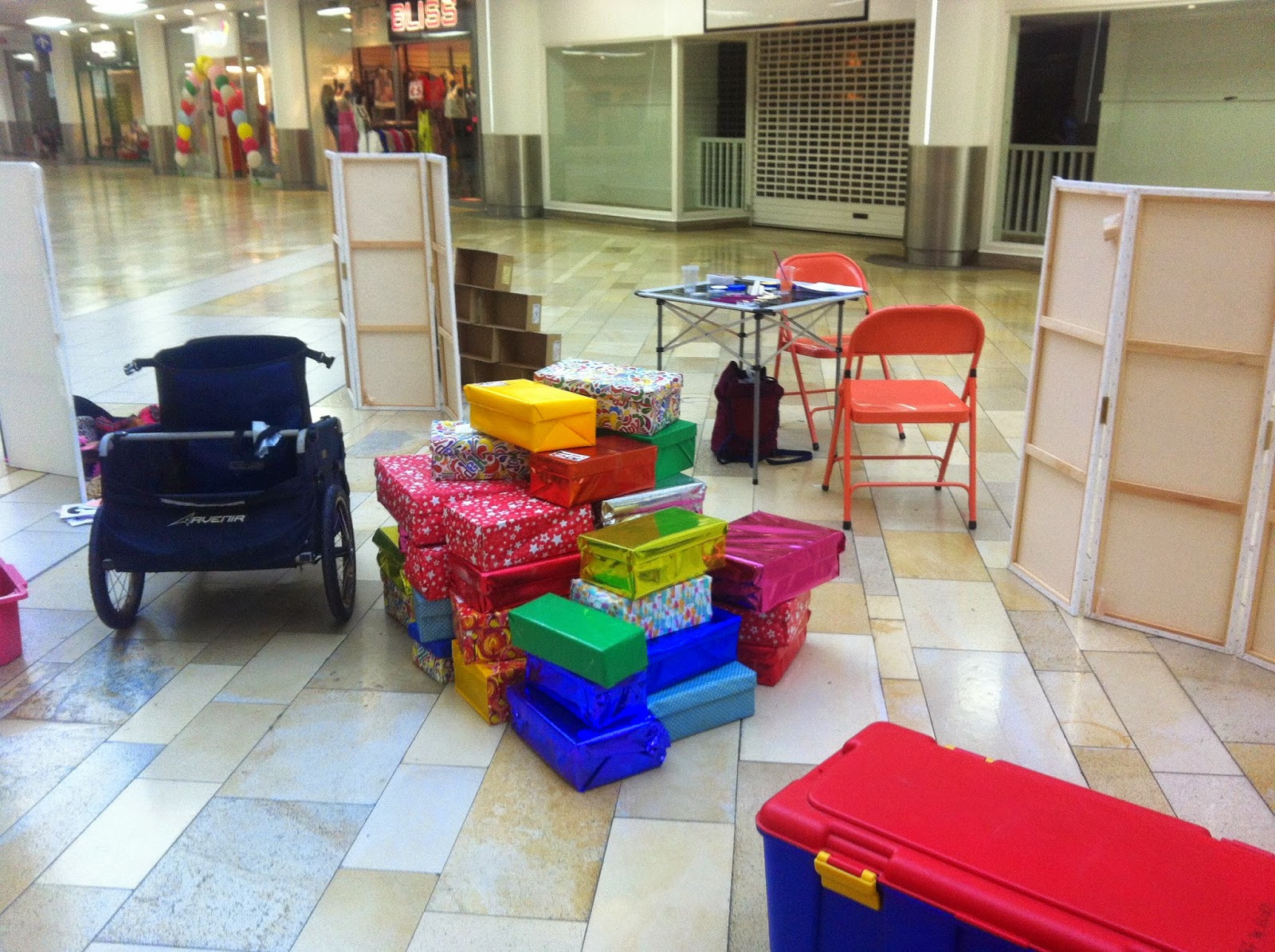 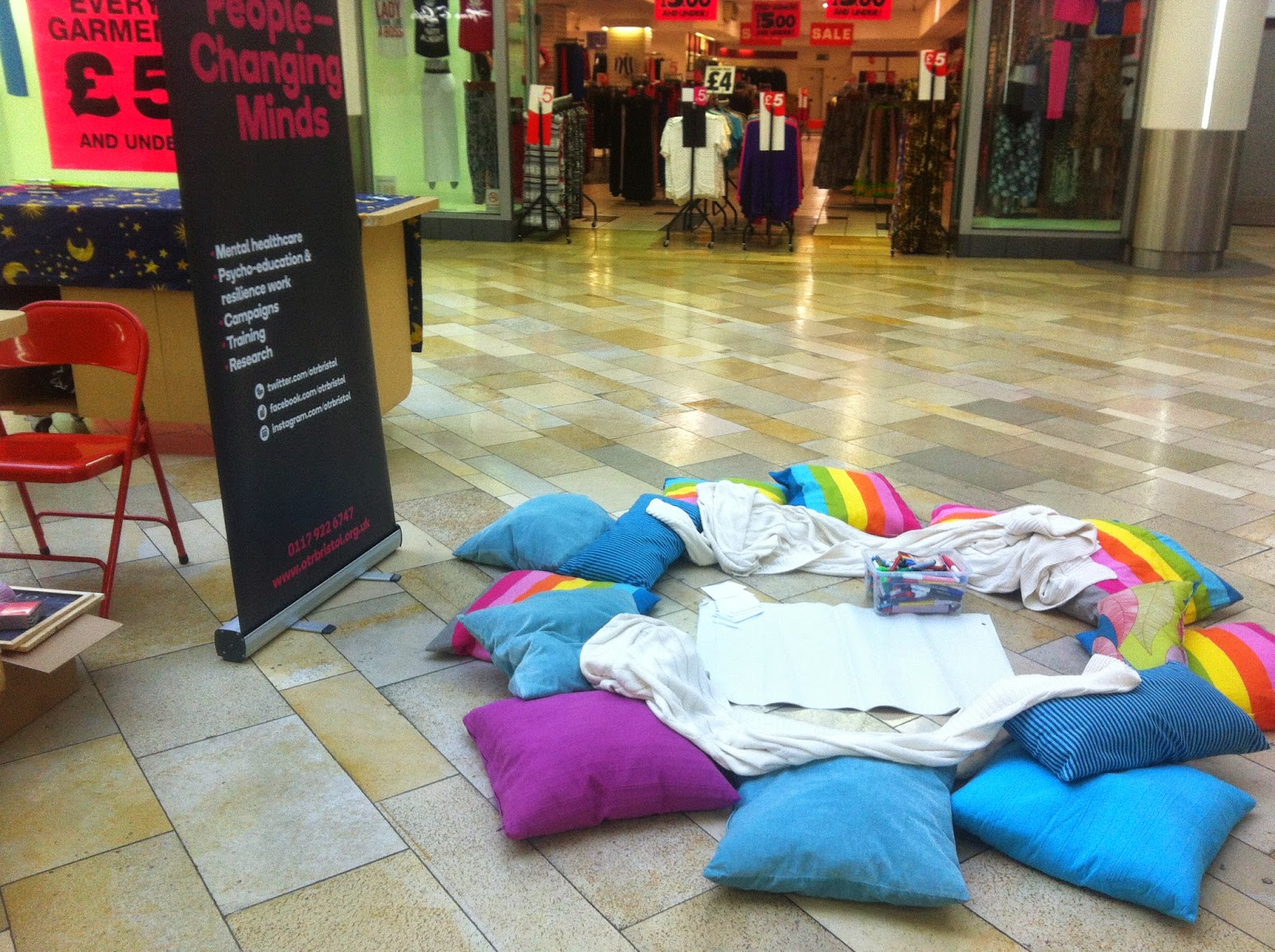 I Modelled the Dressing Up Activity 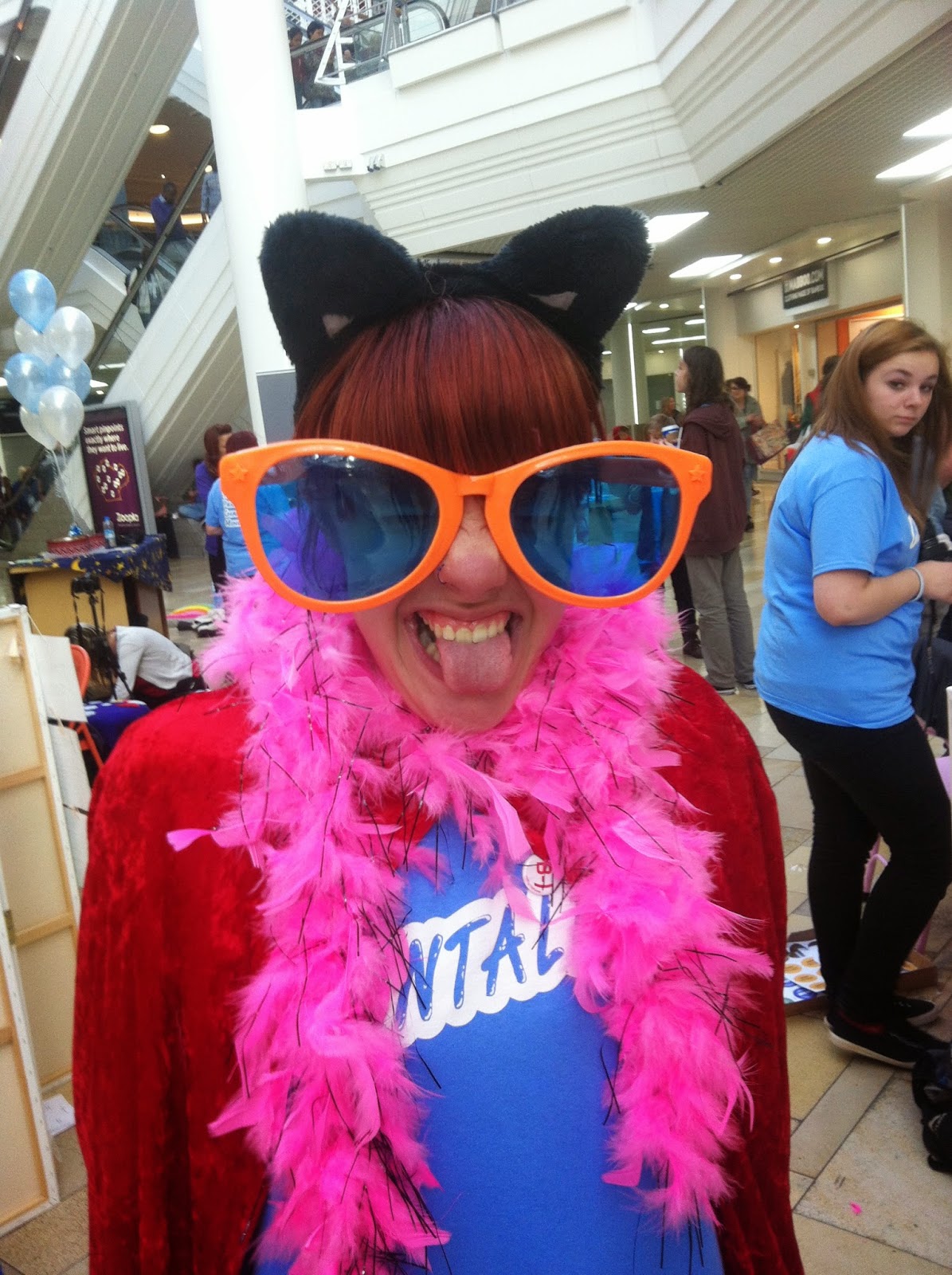 In addition, we handed out information on not just Off the Record and the Mentality Project, but a range of mental health issues and services. This table attracted quite a bit of attention, with loads of people taking leaflets- hopefully we’ve helped to get information to people who will really benefit from it! 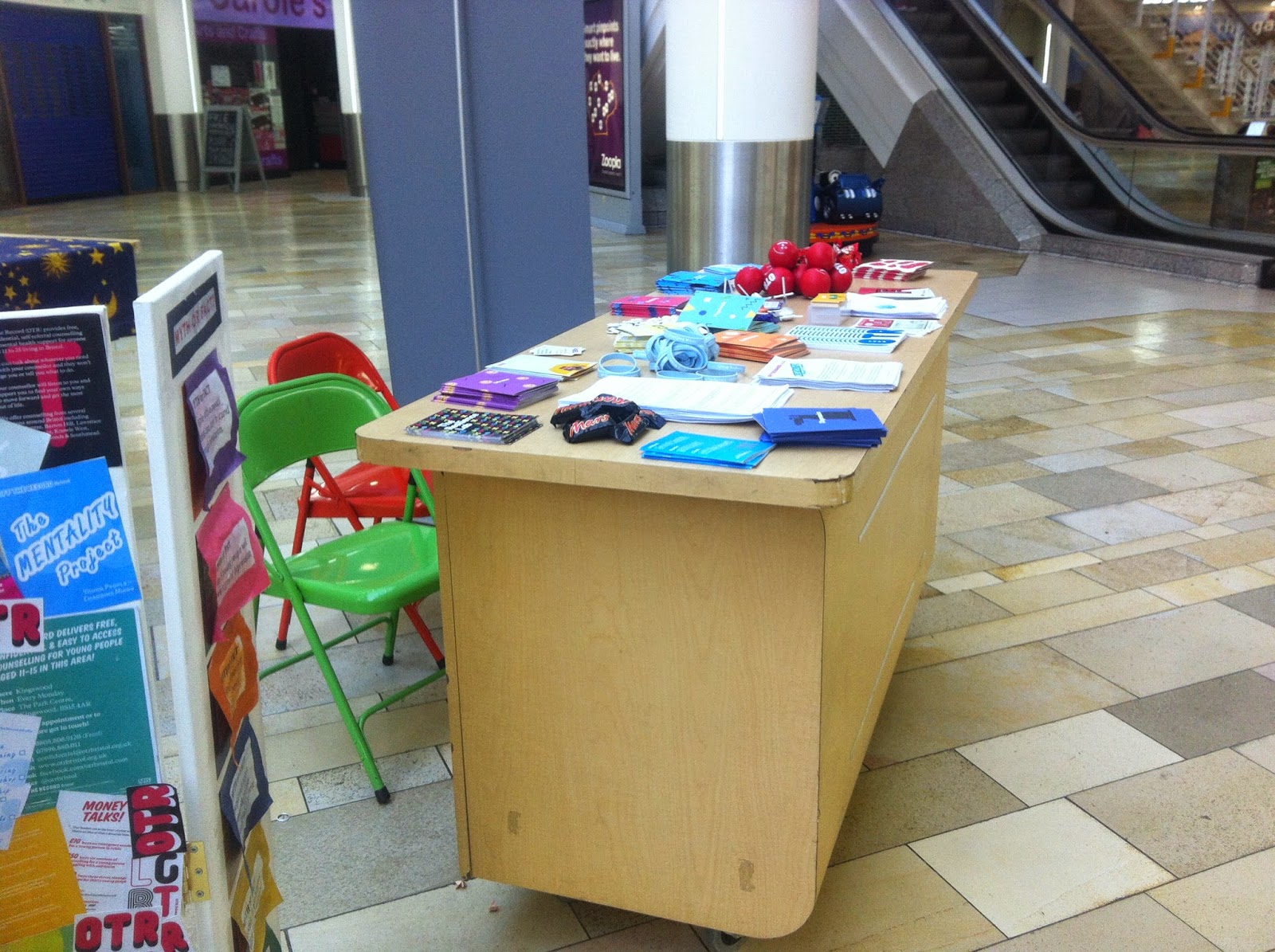 To add to the Mentality hub, we had four other organisations – Bristol Drugs Project, who did a stall around the effects of alcohol, Brook (a sexual health group who I also volunteer for!) with an activity around self-esteem (see the ‘self esteem’ bracelet below, contributed by a small child!), Resilience Lab, a part of OTR who try to increase individuals resilience to life challenges, and Freedom Youth, Bristol’s LGBTQ+ youth group. They had a stall making badges. In other news, I now have some of the coolest badges in existence!

‘You Are Not A Lion’ 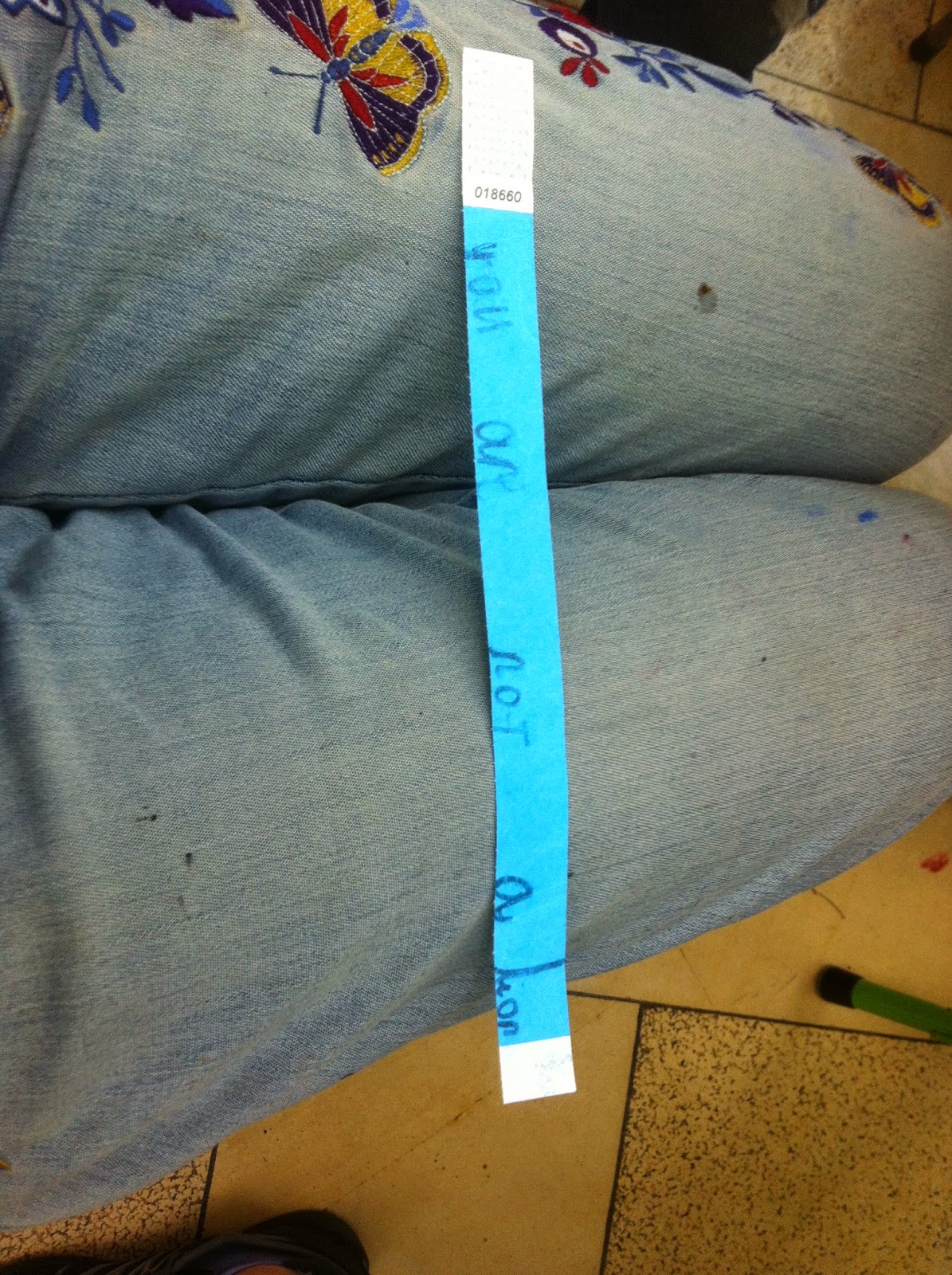 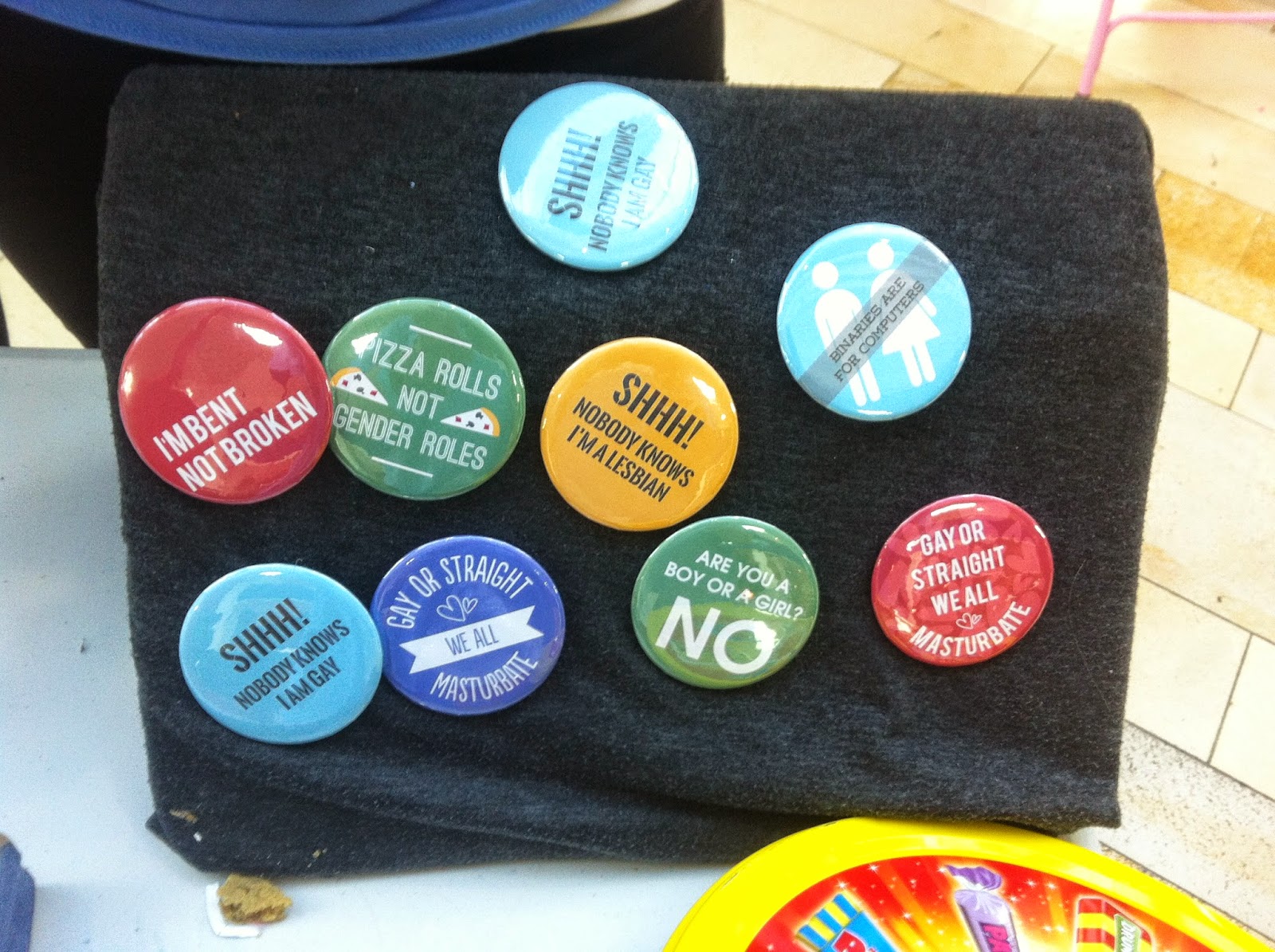 As well as the main event, we had teams going out to do ‘outreach’ in the general Bristol city centre area. They were armed with chalkboards and cameras, and got people to write down things that made them happy before taking a picture of them with their contributions. These are going to be used to make a film about positive mental health.

Lastly, we had an amazing juggling duo, who did one of the activities- getting involved in hobbies for positive mental health- and did a fab show that got loads of people watching! 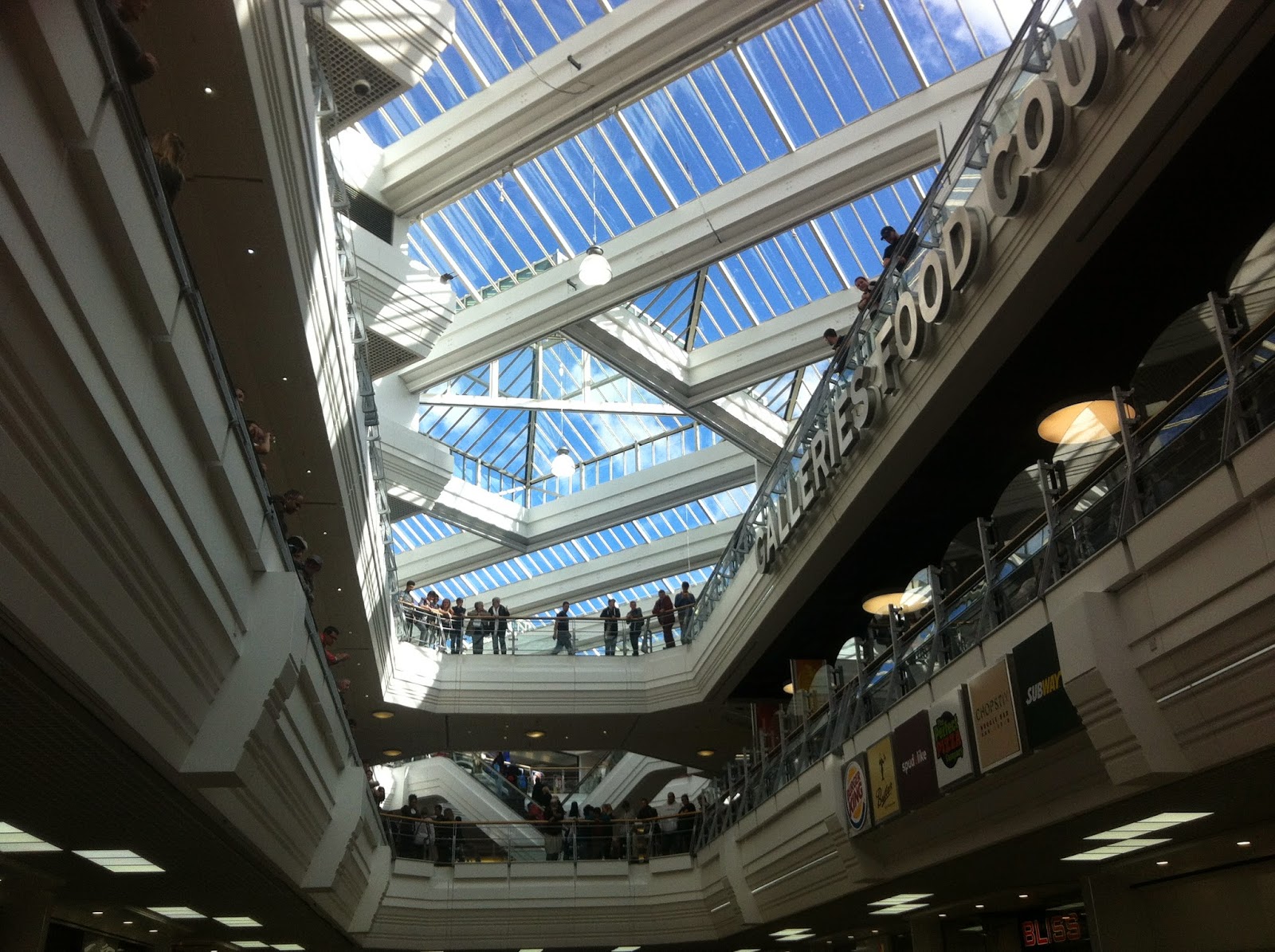 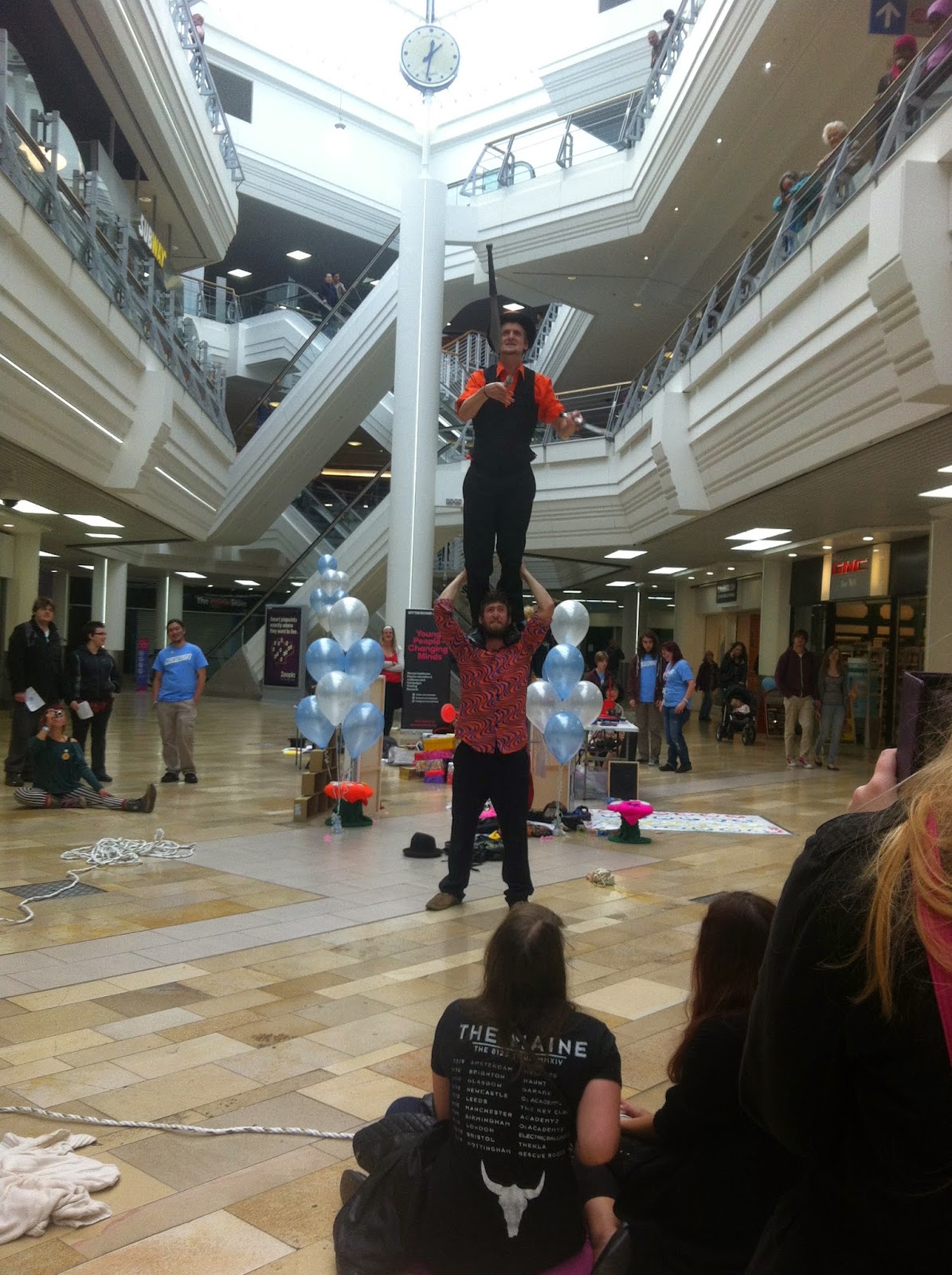 Overall, the day went really really well. It’s one thing me saying that- but it’s proven in the fact that we smashed both of our goals, which were to speak to 500 people and to properly engage 100. Using the numbers of Off the Record business cards we handed out, the number of pictures taken and the amount of Happiness Boxes claimed, we went far and beyond both of these targets, which is absolutely amazing. In less statistical terms, it means that we got a heck of a lot of people thinking and talking about mental health, which is really important. Mental health is often ignored- or, worse, stigmatised. The very fact that we were there, in the Galleries, refusing to go away and putting mental health right in the public eye was huge. 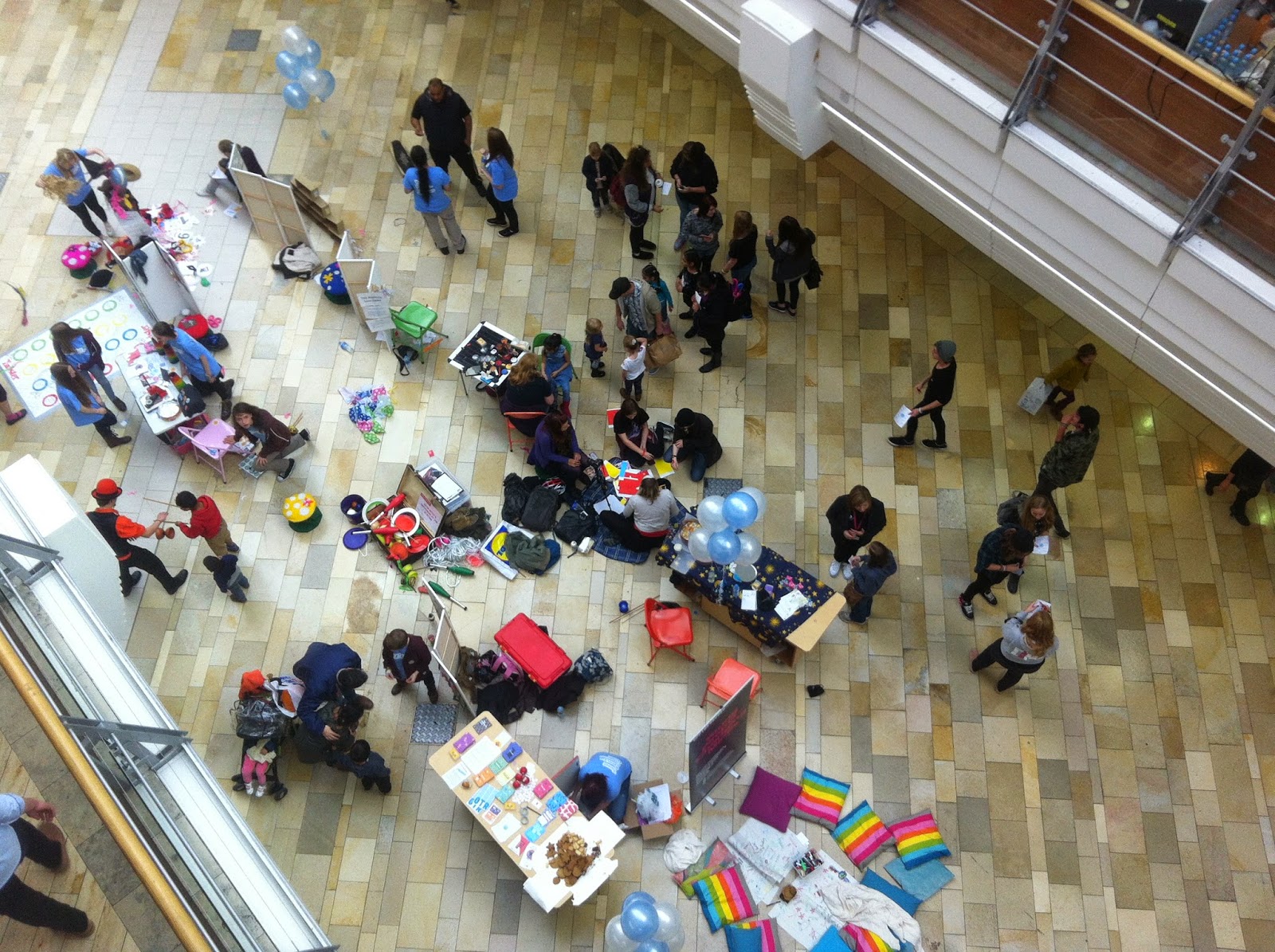 Even the Mayor Paid a Visit! 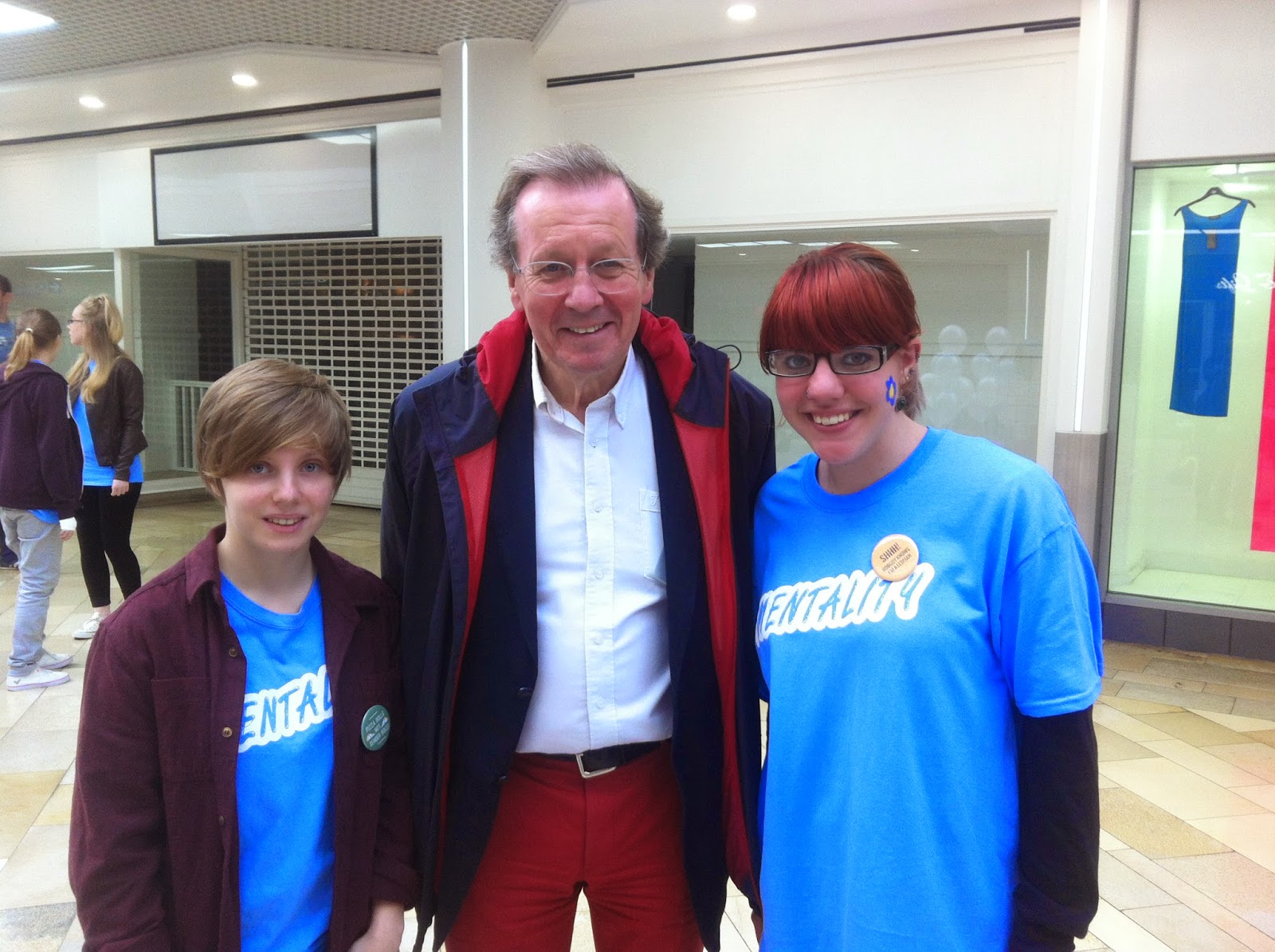 On a more personal note, the day was one of the highlights not just of my year, but of my life. I got a chance to help with all of the stalls, did some of the outreach photography, and also went around the Galleries publicising the event. It involved lots and lots of speaking to strangers, which was terrifying at first, but got a lot easier the more I did it, and was really rewarding. Mental health is something hugely important to me, so it was great to have such a focus on it. A real highlight was when I spoke to a few younger children, and explained- in kids terms- the importance of mental health- ‘sowing the seeds’ for later life, as I like to think!! All in all the day was amazing. If I could do something involving that level of campaigning as a permanent job, then I’d be pretty damn chuffed!

To sum up my thoughts – I am so lucky, for I love what I do and I do what I love. I’m honoured to be a part of campaigns such as this, and to really get out there, doing what I genuinely feel as if I was born to do. Even better, I get to share it with a group of amazing people. My fellow Mentality Project volunteers are awesome-sauce, and I love them to pieces. We rock!

(Lastly- How Cute is the Dog that Came to Get Involved?!) 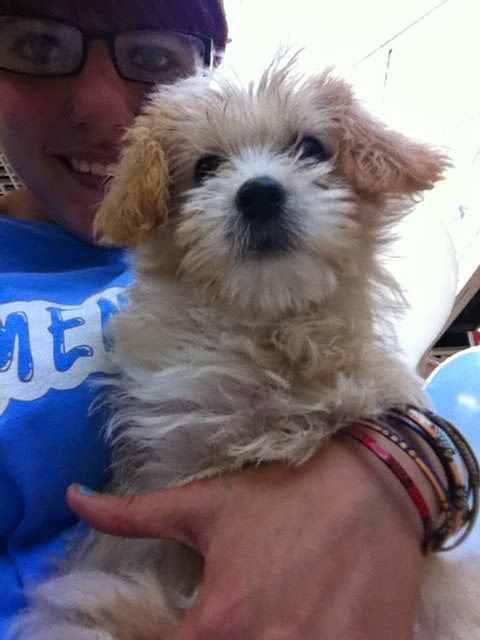