Stand Together, Stick Together – “Mental illness is not a fashion statement”

SATURDAY: Part Six of our Stand Together, Stick Together #MHAW16 campaign: “Mental illness is not a fashion statement”. Written by Mentality… 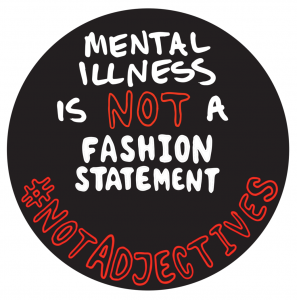 Recently, new depictions of those with mental illness is being shown on the TV as eccentric geniuses; desirably quirky, cute and vulnerable characters or that their mental illness is a trendy fashion accessory.

On social media people are wearing their mental illness loud and proud, stating that they are OCD as it is makes them sound cute and special. While this is better than stereotyping people with mental illness as violent, this still makes me us angry because it trivializes mental illness. It confuses the line between mental health struggles and mental illness.

It’s also dangerous, but in a different way; it makes an undesirable health condition seem desirable and even an advantageous trait. It encourages unhealthy eating habits and harmful ways to cope. It stops people seeking help as they are worried they are going to be label as an attention seeker.

There was a trend where it was ‘cool’ to wear a famous rock star’s suicide note on a t-shirt, what for? To profit off of someone’s distress?

There is another argument to this, where people are saying actually it’s OK; that a humorous statement on a t-shirt about mental health makes a difficult subject easier to talk about.