Stand Together, Stick Together – “There is nothing romantic about suicide”

WEDNESDAY: Part Three of our Stand Together, Stick Together #MHAW16 campaign: “There is nothing romantic about suicide”. Written by Mentality… 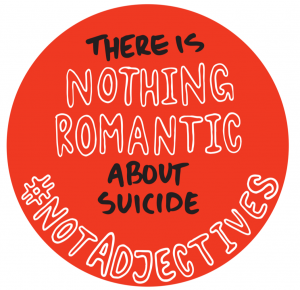 The romanticization of the act of suicide has a long history, including in literature dating back to the eighteenth century (for example, Romeo and Juliet).

More recently, it has been glamorized in music, movies, in blogs and across social media platforms. There has been much research and speculation about the reasons for suicide. Suicide can be viewed as a ‘way out’, as a selfish act of vengeance or a romantic gesture of relinquishment.

The reality of suicide or attempted suicide is not romantic or glamorous; it often leaves a painful and demoralizing legacy, both for the protagonist and the people left behind. If somebody’s depression or mental ill-health has become so persistent and entrenched that they cannot see a way out and start to contemplate suicide, they are likely not in a place where they are thinking rationally enough to romanticize the act in their head.

Instead of romanticizing or demonizing suicide and people who are feeling suicidal, perhaps our media outlets should be encouraging people who are experiencing difficulties to seek help from loved ones, peers or professionals.