Hello everyone and welcome back to another OTR’s book club blog! 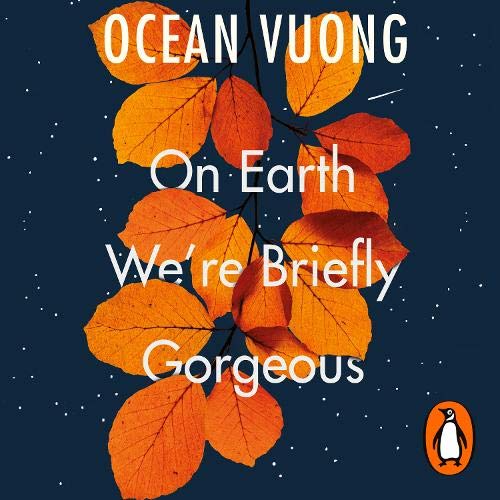 This month we discussed On Earth We’re Briefly Gorgeous by Ocean Vuong. This book is written as a letter from a son to a mother who cannot read. It really explores the relationship between the two of them and you see their undeniable love however, it is also a brutally honest evaluation of race, class, and masculinity.

First, we started off by talking about how long it took us to read the book. Kavita said she finished it in 2 days and so did Kate! Kate said it was the top book he’d read in quite a while and was beautifully written and Ryan said he was wondering how much it was based on the author’s life. Finch says they really loved the poetic style and was surprised how much the jumping back and forth is working for them so far!

However, we all agreed that we collectively hated the monkey bit! (you know what I mean if you’ve read it!!)

Kavita said it was really nice to see gay sex in a novel – let’s not lie about what’s happening! She thought how the author writes in terms of atmosphere, was also very well written and very raw. Casey loved it and thought the graphic stuff was really important too – not what most LGBT books have! Ryan really liked image of butterflies migrating and that it was a really beautiful image.

Kavita then raised the question of why he has named his character Little Dog. Finch and Megan came to our rescue and explained that little dog was to ward off evil spirits in the book. In Vietnamese culture, if evil spirits came to village, little dog, would ward off spirits as spirits don’t want to waste their time with a dog!

Kavita and Kate loved the depiction of ‘sorry’ and how it was used instead of ‘hello’. We thought it was a very British thing; to say sorry is to lower yourself in some cultures but it’s part of our culture in Britain!
Kavita thought it was interesting when the author spoke about the railroad worker and how the worker was ‘nameless’ and was ‘not a human’ as they didn’t fit into any category of race or colour at the time. We all agreed it was absolutely awful and so sad to read.

We then moved on to talk about the book being basically a letter, and what we thought about the mother. Kavita noted that the mum reminded her of every immigrant mother she knows, who just knows how to survive and can’t nurture a child. Casey said about how it might either be a good or bad thing for the mother to read the letter after it was finished. Also, that the mum almost seemed like they didn’t want the child! Kate loved the idea that the book was being written for someone who couldn’t read it and Ryan thought that the mother had so much emotional baggage they cannot control how they are behaving now!

Moving on slightly, Kavita thought the author was trying to find a reason for the mother’s behaviour and the whole book was kind of like self-therapy and was trying to work out why the mother behaved the way they did. Catherine said that it was just life, and it was messy, and it was his experience. Some books are too idealistic but this one was so real.

We then spoke about things that we didn’t like so much. Kavita said she found it really annoying how they explained back story 3 times and Casey agreed! Kavita also said she didn’t like ending but that was not fair as she’d just read the best book of year… For Kate the ending didn’t have a strong meaning, as he knew that it was letter that wasn’t meant to be read. Megan said she liked how title of the book was was explained at the end.

Ryan said how he thought it was a bit ambiguous at the start as to if the book was fiction or a memoir or something else. Kavita thought that whether it’s real or not doesn’t really matter as it doesn’t stop you enjoying the story!

We had a really interesting discussion this month with a lot of great ideas spoken about. Lots of us agreed it was one of the best books we’ve read this year! Join us next time when we’ll be discussing Felix Ever After by Kacen Callender!

Hello again and welcome back to the OTR Book Club blog! This month we discussed Mythos: The Greek Myths Retold by Stephen Fry. SPOILER ALERT! Our review contains details about the storyline. Hello eve...