Hello again and welcome back to the OTR Book Club blog! This month we discussed Mythos: The Greek Myths Retold by Stephen Fry. 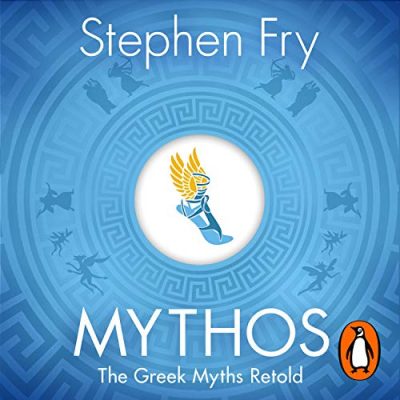 Hello everyone and welcome back to another blog for Off The Records book club! This month we discussed Stephen Fry’s Mythos: The Greek Myths Retold. In this novel, Fry revisits the old Greek myths that we know and love and makes them accessible for a modern audience.

The first thing we mentioned was the structure of the book. Even though the whole of the Greek myths is one long story, the individual stories can be told and read separately. Nat said she really enjoyed it and it was a really nice one to chat about seeing as you could talk about it no matter how far you are into the book.

We also talked about what were favourite myths were. Rose I really liked the myth about Melissa; the myth which explains where the honeybee came from! Bethan says she liked the one about Apollo and his son, as it tells you about how the ice caps and the desert came about! Nat said one of her favourites was the story of Prometheus and how he defied Zeus to give fire to the humans and how fire resembles knowledge and power. Stella’s favourite story was of Psyche and Eros (or Cupid) and how she related the story to the statue at the Louvre. Joe said it made him smile when the Gods were moulding the first people out of clay and Zeus came and trod on the blue and green figures, which is why we don’t have blue and green people!
We also talked about how interesting it was that a lot of our words have Greek origins. One of the examples is the word ‘tantalising’. This comes from the story when Tantalus was punished by always being hungry and having a piece of fruit being hung just out of his reach, tantalising him. I think we all really enjoyed that. Nat also commented how you don’t realise how much of it is engrained in our culture. She studies music and learned that the opera is based on the Orpheus myth.

We also talked about how we loved how the stories were kind of explanations for things that happened in the world. For example, the Persephone and Hades story explains how the seasons came about; when Hades takes Persephone to the Underworld for six months, Persephone’s mother is really sad that she’s gone, which is why we have winter. Then when Persephone is returned to her mother for six months, her mother is happy and that’s why we have summer! Rose says she thinks that the myths that try to explain things like this are inherently more memorable! Also, Nat commented that she thought she knew the Greek myths pretty well but this novel showed that her knowledge was really lacking!

It’s very interesting how there are so many different versions and interpretations of these myths, and Fry has taken his favourite versions and put them in the novel. Charlotte said she’d only ever heard of these myths verbally up until now and had heard a lot of different interpretations to the story that Fry told! Blythe, who’s got a background in classical literature and mythology said that he’s done it so well to compare all the different versions and he’s done a really good job to bring it all together. One of the examples of alternate versions that Nat pointed out was pandoras box story – in the version Fry chose to retell, the box was actually a jar!

We then talked about how hard it was to actually follow the overall story with all the different characters that were introduced. The Greek names were slightly harder to grasp anyway, and then it was very confusing to follow who was sleeping with who, who had children with who and how they were all related!
We commented that even though these stories are ancient there were so many same sex relationships and these stories were so open about it. Enya made the very good point that it’s strange that so many of the myth elements are in our everyday life’s and beliefs, but the fluidity of gender and sexuality seems to have been forgotten!

Blythe said she prefers the Gods in these myths to more modern ones; they are flawed the same way that humans are flawed. Joe said he liked how it doesn’t give them responsibility for stuff that’s out of their control. Stella said she liked how the stories told of why natural disasters happened and how Gods weren’t responsible for them.

Joe said he thought the imagery was great; Zeus gave birth out of his head to Athena and the imagery around pandora’s jar and how the breaking and releasing of the evil spirits is a cool image. Rose said the writing style actually reminded her a lot of Percy Jackson. The tone is definitely more comedic tone and made the book really accessible. I personally could read the book another two or three times and I think I’d get something extra out of it.

To wrap up, I think we all really enjoyed it and most of us would recommend it. Weirdly, almost everyone’s mums have asked if they can borrow it! See you next time when we will be discussing When No One is Watching, by Alyssa Cole.